Electric vs Acoustic Guitar: How To Decide What’s Best For You

Choosing your first guitar is an experience you will never forget. It’s the starting point of an exciting musical journey and will help shape your future as a musician. Therefore, it is important to make the right choices when deciding whether to go for electric, acoustic or electro-acoustic. There are many different varieties of each, and we will go through some options to help make your choice that bit easier.

Firstly, it’s important to decide what kind of music you are going to be making, as that will shape the decision of whether to go electric or acoustic. If you are a metal musician or want to play rock music, then the electric guitar will be for you. If you are a singer-songwriter in the folk genre for example, then it is very likely that acoustic guitar will be your best choice. There are folk musicians who play electric guitar, and occasionally heavy rock bands that use acoustic, but generally these will be the choices you fall into.

An acoustic guitar is part of the string family of instruments and is used by plucking the strings which are either nylon or metal to create a vibration which in turn creates a mellow sound from the guitar. The acoustic guitar will invariably be your starting point when first learning to play the guitar.

There are reasons for this – it’s quieter than electric and you can take it anywhere without needing to plug it in. It is also a great place to start your journey. If you hone your technique first on an acoustic, then you can easily move on to the electric at a later point because the fundamental chords and techniques are the same. You will often hear electric guitarists talk of starting on acoustics, and if you are looking to play open mic nights and in pubs, acoustic guitars can easily be carried around and played.

It is often a great idea to purchase a cheap acoustic guitar to see if you have the level of interest it will take to fully learn the instrument. As you start to build your technique you can upgrade your guitar, or just stay on the full acoustic. You can pick up an excellent starting guitar for around £150-200. Once you have spent some time learning the acoustic guitar, you may want to upgrade to an ‘electro acoustic’. Or, you may well have bought one straight away and been learning on that all along!

What is an acoustic electric guitar vs acoustic

Acoustic Electric guitars are acoustic guitars with an electrical pick up system fitted which enables you to plug your guitar into a PA system, DI box or studio setting. Electro-acoustics have become the most popular acoustic guitars amongst singer-songwriters and gigging musicians because they can be plugged in anywhere, whether that be busking, a gig venue, open mic setting or a studio. If you are starting on the open mic circuit, it bodes well to have an electro-acoustic guitar as you can take it straight onstage and plug it into the venue sound system without having to fiddle around with microphones to amplify your normal acoustic.

Another massive advantage of electro-acoustic guitars is that they often have an onboard tuner. Tuning the guitar can be a bit of a thankless task when first starting, and although you can buy tuner pedals or devices that attach to the neck of the guitar, having an onboard tuner is very useful, especially in a gig situation where you need to tune up quickly and with minimal fuss. The only thing to watch is in environments with a lot of other noise going on as they can sometimes be affected, but generally onboard tuners are pretty accurate and very useful to have. The tuner will usually be situated in the control panel on the top of the guitar so you can operate it during a performance or studio session easily. Top tip – remember your battery! Most electro-acoustics take 9v batteries, but they do run out now and then so it’s always a good idea to have a spare one in your gig bag or in your pocket, should it go down mid-gig!

Some good mid-range electro-acoustic guitars can be found by makes like Epiphone, Faith and Sigma.

If you have a more elaborate budget you can look at a Taylor or a Martin which are fantastic guitars in the upper end of the market. Martin does also do a mid-range model now, so that could be something to consider if you like the look of a Martin for a much lower price!

Another option in the acoustic market to consider is a classical guitar, also known as the Spanish guitar. If you’ve ever been on holiday to Spain or watched films or tv shows that feature a Spanish restaurant scene, you are sure to have heard the delicate tones of the classical guitar. Classical guitars are beautiful instruments and they have a distinct sound. With nylon strings instead of the steel strings you find on acoustic guitars, they are often a good starting point for young guitar players as they feel less harsh on the fingers.

Classical guitars are traditionally used in both classical and Spanish music but many rock and pop singer-songwriters and guitarists are using them as they give a nice delicate sound both live and in the studio. Classical guitars now also come as electro-acoustic options so you can even buy one and use it as a regular gigging guitar. They are also very popular in studios for guitar players looking for a more mellow sound on a recording.

Great beginner options for classical guitars can be found by manufacturers such as Ibanez, Yamaha and Cordoba. In the higher end of the market, Hofner and Cordoba make some of the very best. These models would be best suited to a more experienced guitar player. 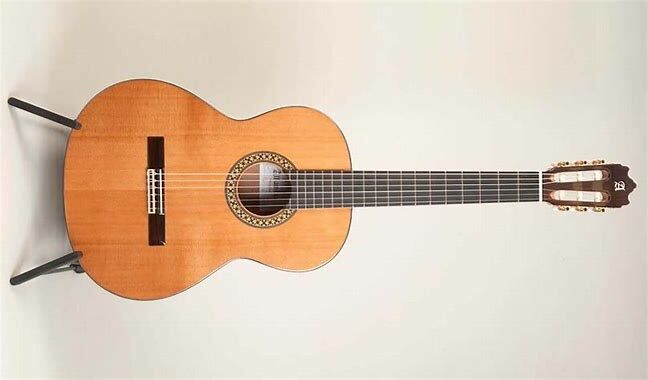 When learning guitar, many people aspire to become a ‘guitar hero’ eventually on the electric guitar like Hendrix, Santana or Clapton. The electric guitar is the flashiest of the guitar models and intertwined in rock and roll history. There have been so many great electric guitarists over the years, and it is a real skill, impressive to the ear and the naked eye. Virtually all famous solos you will ever have heard will have been on an electric guitar. Professional players often use pedals to add extra effects, so it’s often a good idea to google your favourite guitarist to see what set-up they use to create their tone as you build your sound and style.

Is It Easier To Learn Guitar On Acoustic vs Electric?

There are so many electric guitars to choose from, and if you go to any good music shop you will no doubt find hundreds of different models. Popular guitar brands include Fender and Gibson. Each brand has its own cheaper models for beginners and right up to the expensive classic guitars. For example, if you like Fender Telecasters, you can buy a cheaper Japanese imported model for just £200-300. There will be beginner models as well.

Bass guitar is another discussion entirely, and perhaps that will be an article for another day. It is worth trying to play the bass and seeing if it is for you. It’s a specific discipline, but a vital cog in any band or recording set-up. When it comes to choosing between the two, as previously mentioned, it does come down to the kind of player you want to be, and what genre attracts you. If you want to be like Hendrix or John Mayer then electric could be your best bet. If you want to write folk songs, the acoustic will be for you. Or you could do both! It is worth noting that most guitarists start on acoustic, so why not pick one up and start strumming and learning shapes and chords. You can migrate onto the electric guitar in due course, if that is the route you want to take, or you can carry on playing both for the rest of your career.

From a listeners point of view, it depends on musical preference, but for sheer excitement and wow factor, electric guitar surely has to shade it!

It would be a great idea to visit music shops, research your favourite musicians and see what they do and then make your choice. The best tip is to start on the acoustic and then see where your musical journey through the world of guitars takes you. An electro-acoustic is a good tip because they often have tuners and can easily be plugged in for gigs.

Within a few years, if you’re anything like most guitar enthusiasts, you’ll probably end up with a collection of both electric and acoustic!

Electric vs Acoustic Guitar: How To Decide What’s Best For You